Officers across the Met are listening to young people’s ideas about policing and working with them to make a change on Stephen Lawrence Day, today, Thursday 22 April.

In Greenwich, where Stephen was tragically murdered in a racist attack 28 years ago today, Met Volunteer Police Cadets (VPCs) are joining a virtual workshop organised by the Stephen Lawrence Day Foundation, in which they will have an opportunity to ask Stephen’s brother, Stuart Lawrence, questions.

Yesterday, they took part in a similar event organised by local officers, to discuss with them the significance of Stephen’s death, issues of diversity and violence arising from it, and the changes they would like to see in policing and society more widely.

Similar discussion groups with VPCs have been taking place across London all week and will continue next week.

Meanwhile, Met VPC Awele Benoku, 14, will interview the Minister of State for Crime and Policing, Kit Malthouse, at an event organised by youth charity the Prince’s Trust.

Ahead of the interview this morning, Awele said: “The interview will be a great way to understand decisions made by people in authority and a great opportunity for someone of my age. I want to ask the minister why it is important that we remember the legacy and life of Stephen and what steps the government is taking to ensure that there are more ethnic minority police officers.”

Awele, who has been a Met VPC for more than a year, continued: “Stephen Lawrence Day is important because it marks a change in society, and [Stephen’s murder] made the police review how they work. It marks a day when someone who wanted to do good lost their life through something they couldn’t change about themselves - their colour. It makes me realise that I have lots of opportunities that others don’t have and not to take them for granted.”

Sign up to watch Awele’s interview at 11.15hrs today by visiting www.eventbrite.co.uk/e/an-interview-with-kit-malthouse-stephen-lawrence-day-2021-tickets-149906595663

KickOff@3 seeks to inspire, motivate, engage and support young people from all backgrounds through the medium of sport, music and other imaginative ideas.

PC Wallace and the KickOff@3 team have supported young people in organising the music and poetry event in memory of Stephen. The Unity Livestream event will start at 18.00hrs and feature guest speaker Stuart Lawrence. A panel of judges, including Chief Inspector Annmarie Cowley from the Lambeth and Southwark borough team, will award young music artists with prizes donated by a range of companies.

PC Wallace said: “The event has been organised by young people - it’s come from their hearts. They’ve used their skills and creativity to make something which I feel is really in the spirit of Stephen Lawrence Day. Many of the young people involved didn’t know much about Stephen but in pulling this event together they’ve found out more and been inspired to express how they feel about his death.”

To join the event see: www.twitch.tv/kick_pistol

The Met’s activity this week is just a snapshot of the kind of work the organisation is doing with young people on a daily basis, to increase their trust and confidence in policing and to work with them to create a safe, fair and respectful society for all.

Speaking today, Assistant Commissioner Helen Ball, chair of the Met’s Strategic Inclusion, Diversity and Engagement Delivery Board, said: “Stephen Lawrence’s death was a tragic waste of a life that was full of promise. It is appropriate that on Stephen Lawrence Day we are trying to empower young people by asking them, ‘What’s important to you? What changes in policing would you like to see and how we can work together to achieve that?’

“There are numerous ways young people can influence policing and help reduce crime all year round – including joining our cadre of almost 4,000 Volunteer Police Cadets, getting involved in the Strategy Advisory Group Youth Subgroup and simply speaking to our officers when they’re out and about.

“Protecting young people from harm and diverting them from crime – particularly violent crime – is one of the Met’s highest priorities, so the importance of the work we do with young people really cannot be understated.”

Asked why she joined the Met Volunteer Cadets over a year ago, Awele said: “My behaviour at school was not good and I didn’t know what I wanted to do with my time, so I thought joining the Met Volunteer Police Cadets might help shape me.

“I love to volunteer. We do lots of different events and activities. One that sticks out in my mind was a visit we did before lock down to a residential care home for the elderly. We all went in our uniforms and chatted to the residents, some of whom had dementia, and we made them all smile and laugh. When I got home I really felt that I had made someone’s day.”

Find out how to become one of many Met VPCs making waves in the community at www.met.police.uk/car/careers/met/police-volunteer-roles/volunteer-police-cadets/overview

For more information on the Strategy Advisory Group Youth Subgroup, a community and youth-led working group that has a particular focus on policing and young black communities, please email the Met’s Crime Prevention, Inclusion and Engagement team at CPIEMailbox-.CommunityEngagement@met.police.uk


Back in Greenwich and the surrounding boroughs, officers and VPCs are wearing hundreds of orange ribbons handmade by PCs Emma Cross and Tara Duffy, to mark the day and start a conversation about Stephen’s legacy with people of all ages. The officers – including a team of dedicated youth engagement officers – will also be taking the conversation online by tweeting pictures of themselves wearing the ribbons, with personal messages about what Stephen Lawrence Day means to them.

In the west area of London, new officers are taking part in a session about Stephen Lawrence, to understand the case and its legacy, particularly in respect of policing.

Talking about the impact of Stephen’s death on policing, AC Ball concluded: “The Met has come a very long way since Stephen’s murder and since the publication of the Stephen Lawrence Inquiry Report. We have worked with London’s many diverse communities to build positive relationships and improve how we police. However, we recognise that more and faster progress continues to be needed, with movements like Black Lives Matter bringing into particular focus issues around the policing of black communities.

“We will continue to focus on what matters most to Londoners - we are listening and responding. We have increased community involvement in everything from officer training to reviewing stop and search encounters. We are making progress in recruiting a workforce that reflects the city we serve, so that we can achieve our mission of making the Met the most trusted police service in the world.

“Communities rightly want the Met to hear their concerns and act on them, and that’s why the conversations we are having with young people are so important – young people are our future and they can make a difference.” 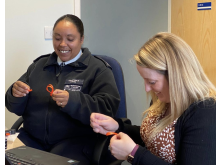 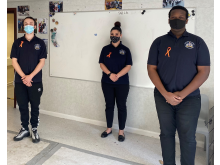 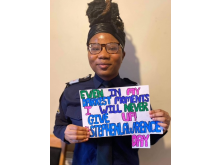