In its 13th year, the POP Awards showcased the best examples of partnership problem solving between the police, local councils, businesses and other agencies. This year’s finalists presented their projects where they demonstrated their significant achievements and innovative approaches with their projects.

Commander Mark McEwan said: “The POP Awards showcase the best of partnered problem solving and makes a huge impact around the Capital. Congratulations to the winners and all the nominees and thank you for your dedication, efforts and contribution to keeping London safe."

Nick Lisher, from the POP Awards’ principle sponsor, UK Country for Nextdoor, said: “Nextdoor was proud to be the key sponsor for this year's POP Awards, celebrating some great initiatives by the police and partners in creating safer communities in London. Well done to all the finalists but especially the three well deserved winners for their work in building stronger and safer communities.”

Gold was awarded to the London Borough of Enfield in recognition of its Operation Safe Card, which dealt with crimes committed against elderly residents at cash machines in Enfield.

The operation targeted hotspot venues and officers worked with local partners who had contact with the victims. The team then created leaflets and newsletters highlighting the issues, as well as social media content to help reduce the likelihood of residents becoming victims. This saw a reduction in crime in the hotspot areas and officers also received training to improve support to victims.

Also receiving gold was the London Borough of Hammersmith and Fulham, for their work on anti-social behaviour (ASB) and violent crime in Shepherds Bush Green ward. Officers dealt with an increase of ASB, disorder and violent youth crime in the ward. There had been 76 reported crimes in the area and officers established that many local businesses and residents were being affected.

Dedicated ward officers were also able to gauge the severity of ASB and other incidents as residents raised their concerns on social media. Officers then issued closure notices on premises where there was anticipated disorder near to or associated with those premises, which saw a reduction in crime for residents and businesses.

Bronze went to the London Borough of Brent for dealing with a group of around 20 youths loitering outside Dollis Hill tube station. Officers and the local council saw a significant increase in calls reporting drug-dealing in public. The calls also suggested that older males were exploiting some of the younger males, highlighting safe-guarding issues. The team identified who was the most responsible gang-member and looked at ways of addressing each individual’s behaviour and the detrimental community impact of residents in the area.

The judging panel was made up of representatives from the MPS. 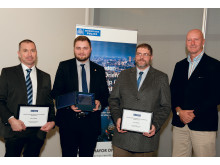 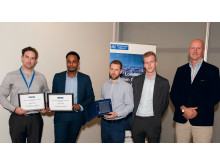