Last Friday, Saturday and Sunday, throughout the day and night, the Met’s police dogs were making their positive contribution to keeping London safe.

At 14:00hrs on Friday, 19 February in Sutton, officers were called to a fight on a bus where a suspect had discarded a knife and thanks to PD Rocky, a four inch kitchen knife was found tucked in the bottom of a bush

At 17:50hrs in Barking, a man ran off from a vehicle containing a Samurai sword and drugs. PD Hugo was deployed to search. Hugo searched through open gardens before locating the suspect hiding in a service road behind a garage. He was arrested on suspicion of possession of drugs with intent to supply and possession of an offensive weapon.

At 19:00hrs in Wandsworth, PD Stanley and PD Stella where assisting officers with an arrest enquiry. The suspect was seen to throw items from the rear window of a house and then climb out himself, however a look at the waiting PD Stanley and he went back inside and opened the door to officers. PD Stella began a search for further drugs and in the rear garden she located several large lumps of uncut heroin along with several more rocks of crack cocaine.

In Redbridge at 23:30hrs, two men were seen to run off after an assault; gardens were searched and one suspect was found by PD Nahla, she also located a can of CS spray believed to have been discarded by the suspect. Meanwhile, PD Ziggy and PD Sky were searching for the second suspect and both dogs located a man hiding on a garage roof. He was detained by their handlers and both men were arrested for GBH and firearms offences.

On Saturday, the Met’s police dogs were once again out fighting crime.

In Bexley at 04:00hrs, officers were called to a man who had carried out a serious domestic assault. PD Georgie was sent into Abbey Woods to track the suspect and he was located deep into the woods after a 20 minute search, surrendering to handlers as Georgie approached.

At 17:00hrs, PD Yara helped officers after they were called to a suspect concealing something in bushes. PD Yara found a large 'Rambo' type knife in a sheath hidden in shrubbery on the canal tow path.

On Sunday, at 03:15hrs in Neasden, Brent after a vehicle pursuit, in which an unknown man had made off, a man was stopped three streets away. However, officers had no way of knowing if this was the man involved, as he gave a plausible explanation. But he was undone by PD Nico, who tracked on hard surface back from the suspect they had stopped and, even though it was 30 minutes later, followed the trail down two long streets and into a back garden where he indicated a wall. This was the very wall that the driver, running from the car, had been seen to climb over; the officers now knew they had stopped the right man. The driver was arrested on suspicion of failing to stop and a burglary that been the reason for the initial pursuit.

At 04:10hrs in Harrow, PD Storm was helping officers after two men were detained for robbery. Through Storm’s keen sense of smell, the victim’s car keys were found discarded in thick undergrowth and both men were arrested on suspicion of robbery.

Chief Inspector Graham Horwood, of the M07 Taskforce, said: “At all hours of the day and night, our police dogs and their handlers stand ready to support their colleagues. It is their training and abilities that helps find the evasive suspect or locate the hidden evidence. Time and time again those guilty of serious offences are brought to justice because of the partnership between our officers and their dogs; both make an outstanding contribution to keeping London safe.” 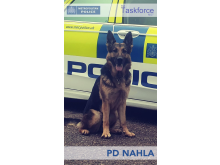 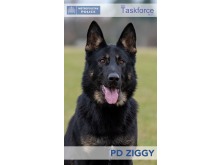