More than 200 people have been arrested in the Met’s largest crackdown on County Lines in a single week.

- 60 weapons were seized including 40 knives, five firearms, and two machetes.

- 85 vulnerable adults and children were made safe;

- There were 11 referrals to the National Referral Mechanism (NRM), which assesses individuals as potential victims of human trafficking/modern slavery;

Throughout the week Met officers closed a total of 23 active County Lines – the highest number of lines ever closed in a week in London. But this only forms part of the Met’s activity to tackle County Lines. In November Home Office funding was used to create a dedicated County Lines team which launched “Operation Orochi”.

This team has gone on to work in collaboration with 17 other forces to arrest and convict those responsible for running County Lines across the UK. There are currently 60 live investigations under Operation Orochi.

Since November 2019 the Met has increased operational focus across the entire force and developed its partnership work to tackle specific County Lines running from the capital. This has resulted in the arrest of 345 lineholders and associates, 635 charges for a range of offences including drug supply, modern slavery and weapon possession. As a result of this activity, a total of 194 County Lines have been closed.

Officers have also rescued 30 vulnerable people identified through their investigations. These individuals have been brought back to London from other force areas having been exploited into the supply of drugs and provided specialist support.

The clear link between drug supply, County Lines and violence has not only been demonstrated through the results of this intensification week, but also through analysis carried out by the Met and the NCLCC. This identified that 1,900 individuals linked to County Lines in London have been charged or cautioned in relation to offences committed within the capital.

More than 1500 people have been charged with approximately 3,000 offences including murder, attempted murder, drug supply and weapon offences.

Detective Superintendent Mike West from the Metropolitan Police Service said: “Since November we have been working hand in glove with forces across the country to identify and arrest those at the centre of drug supply lines.

“Investigating officers at either end of a County Line are developing and successfully concluding investigations faster than ever before. Where a County Lines investigation may have previously taken months to bring to fruition, we are now closing down lines and arresting their holders in a matter of weeks.”

Deputy Assistant Commissioner Graham McNulty from the Metropolitan Police Service said: “The results from the Met’s latest week of activity against County Lines are impressive. I’m proud of all the frontline officers and staff across the organisation who worked incredibly hard to arrest those controlling the lines and safeguard those being exploited to run drugs across the country.

“There is a direct link between County Lines and violence on the streets of London, as is evident through the lethal weapons we seized over the last week. Tackling violence remains our top priority and that’s why our efforts in this area will not diminish, they will continue and increase in the coming weeks.

“We have carried out hundreds of investigations with forces all the way from Scotland down to Devon and Cornwall and in recent months have disrupted some of the most violent County Lines across the UK.” 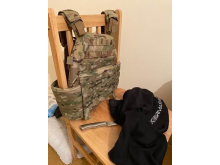 A knife found during a se... 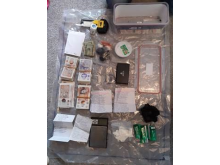