Detectives investigating the murder of a man in Croydon are appealing for witnesses to come forward.

Police were called at approximately 21:30hrs on Monday, 23 December to reports of a stabbing in Woodcroft Road, Thornton Heath.

Officers and London Ambulance Service attended. A 60-year-old man was found outside a residential address suffering from stab wounds. The injured man was pronounced dead at the scene at 21:49hrs.

Next of kin have been informed although formal identification awaits.

A post-mortem examination will be scheduled in due course.

A homicide investigation has been launched led by Detective Chief Inspector Simon Harding.

DCI Harding said: “The victim was found injured in a residential street. While it is not a heavy footfall location, there may have been members of the public travelling through Woodcroft Road who saw something. I urge those people to come forward and speak to my officers without delay.

“No matter how insignificant you think it may be please do make the call. We are building the sequence of events leading up to and immediately following this attack which has led to a man’s death, your call could complete the picture.”

A 50-year-old male was arrested at the scene on suspicion of murder and taken into custody. While in custody he became unwell and was taken to hospital where he remains in a stable condition.

Enquiries into the circumstances continue; police believe the victim and suspect were known to each other.

There is no connection to the recent murder in Drake Road, Croydon.

Residents can expect to see an increased police presence to reassure communities.

++ Do you know about someone who is carrying a knife? If you have information that could help keep your community safe, but don’t want to speak to police, please contact the independent charity Crimestoppers on 0800 555 111. They do not ask your name and cannot trace your call or I.P address.

Any young people who have either information about violence or knife crime, can visit www.fearless.org where they can pass on information anonymously – your I.P address will not be traced. Fearless is part of the Crimestoppers charity, and is also independent of the police. 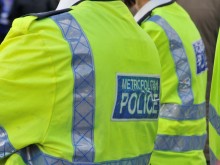 Detectives investigating a murder in Thornton Heath have made a second arrest.