Twelve years after 15-year-old William (Billy) Cox was shot dead in his home on Valentine’s Day, police have released a CCTV image in continued efforts to appeal for further witnesses to come forward.


Officers from the Met’s Trident Legacy Team, who are investigating Billy’s murder, hope that with the passing of time someone will now feel able to bring forward information that may assist the investigation.


Billy had left Acre Lane in Brixton on 14 February 2007 at about 14.30hrs and made his way home to Fenwick Place in Clapham.


Billy’s sister, who was aged just 13 at the time, returned home and found her brother heavily bleeding, lying on his bedroom floor. There were no signs of forced entry to their home making it possible that Billy knew his killer.


Emergency life support was given to him at the scene, but despite the best efforts of the paramedics, Billy was tragically pronounced dead.


A post-mortem examination gave the cause of death as a gunshot wound to the chest.


The investigating team have now released a still CCTV image taken at 14.55hrs on 14 February 2007 on Landor Road in Clapham, of two males walking with Billy into Fenwick Place, close to the time of the murder. Police believe they know the identity of the male in the middle, but the second male - furthest from the road - remains unidentified.


Officers are urging the second male to come forward to assist them with their enquiries. He may hold vital information that may assist officers in bringing justice to the Cox family.


The male is described as being light-skinned and was wearing a dark coloured top, dark coloured trousers with a white stripe down the side and white trainers. He was carrying a distinctive white shoulder bag.


A £20,000 reward is on offer for information leading to the identification, arrest and prosecution of the person(s) responsible for the death of Billy Cox.


Billy’s mother Arporn Cox, said: "My family and I are still seeking justice for an incident that has torn apart our lives 12 years ago. We continue to live everyday with the pain of Billy no longer being with us, and that his father passed away with a broken heart in not receiving justice for his son.


"It causes untold grief when I consider Billy’s last moments and the fact that my precious son, my first born child was so brutally murdered in our home, which should have been his place of safety. It also concerns me heavily to know his killer/s is still out there among our communities. I pray that someone has the courage and strength to come forward to the police to help my family find some peace in all this sadness."


Detective Chief Inspector Sarah McConnell, said: "Although 12 years has lapsed following Billy’s terrible murder, this investigation remains ongoing for the Met. The passage of time in no way diminishes the seriousness of this awful crime or the pain caused to Billy’s family and friends with the loss of his young life.


"It is possible that with the length of time that has passed, allegiances and people’s views may have changed. Upon reflection, someone may wish to come forward with information that will help us solve this murder, serve justice to those responsible and bring some peace to his family.


"The male featured in the CCTV image alongside Billy is of significant interest to the enquiry and we ask them to come forward or for the public’s help in identifying him.


"I appeal for anyone with any information at all concerning the released image or any other aspect of the enquiry to contact our team direct on 020 8785 8267 or via 101 or @MetCC.


You can also pass information to us anonymously, through Crimestoppers charity line on 0800 555 111 or online at www.crimestoppers-uk.org


In June 2007, officers arrested five men. Four were arrested on suspicion of possession of Class A drugs with intent to supply; all were later released without charge.


A fifth man, who was then aged 20, was arrested on suspicion of the murder of Billy Cox. He was later released without charge in 2008. 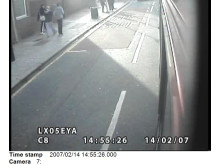