A serving Met officer has been jailed for grievous bodily harm.

PC Charlie Harrison, 39, attached to the Violent Crime Task Force, had been convicted by majority verdict on Friday, 26 March after a five-day trial at Southwark Crown Court.

PC Harrison was sentenced at the same court on Monday, 12 April to two years and three months in prison.

The conviction relates to an incident that happened on 31 December 2018 around 14:15hrs.

A man, aged in his 40s, was walking with his two sons along Sebert Road, Forest Gate, E7.

The man was approached by PC Harrison, who was on duty and in plain clothes, with the apparent intention of conducting a police stop.

PC Harrison then used his foot to strike the man’s legs.

This caused him to fall to the ground, and as a result, suffer a fracture to the knee.

The injured man was treated in hospital for his injuries. He reported the incident to the Independent Office for Police Conduct as a public complaint in January 2019.

The IOPC decided the Met should investigate locally.

An investigation was launched by officers from the Directorate of Professional Standards and PC Harrison was charged with GBH in August 2019.

Commander Paul Betts, Professionalism, said: “This matter was subject to a thorough investigation by the Met’s Directorate of Professional Standards and PC Harrison charged and later convicted by a jury.

“His actions were found to have fallen well below the standard we expect of our police officers, with a man left badly injured. This type of behaviour has no place in our police service and undermines the confidence of the communities we are here to protect.

“Following PC Harrison’s conviction, he will now be subject to disciplinary proceedings.”

PC Harrison is suspended from duty. 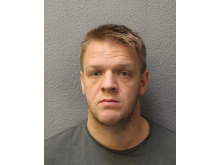