Four police officers, who were on their first day on independent patrol, found £200,000 worth of suspected Class A drugs in Camden.

On Wednesday, 4 November, the officers were carrying out a weapons sweep across the Bourne Estate on Portpool Lane and at 17:30hrs they noticed the smell of cannabis. They traced the smell to a grit container and looked inside to find a package.

The items, suspected to be Class A drugs (heroin and cocaine) with an estimated street value of upwards of £200K, were immediately seized.

The suspected drugs have been sent away for testing and forensic analysis to determine if they can be traced to any individuals.

One of the officers, PC Craig Goodall, said: “Arriving at Central North BCU from training school has been a steep learning curve. Just when we feel we’re mastering something, there’s always something new but I’ve enjoyed the challenge. The four of us have just completed the ten objectives of the street duties course which means that we’ve achieved independent patrol status.

“Yesterday was our first day patrolling without a senior constable alongside us. I must admit I was very nervous when we left Islington police station on our own for the first time but I realise how well prepared we were. “Be curious”, they told us and we were! Our tutors are now trying to convince us that it’s not like this every day.”

BCU commander Raj Kohli, said: “These four officers are clearly a huge asset to the Met after using their professional curiosity to trace this significant amount of suspected Class A drugs. By removing drugs from the streets there is no doubt our communities are safer and we have prevented associated harm and violence linked to drug dealing.

“Six weeks ago, the officers were still undertaking their initial training at Hendon. They have already attained independent patrol status, two weeks early, and they should be pleased with the results from their first day.

“It is our top priority to keep the public safe and reduce violent crime. Thanks to proactive work like this we are able to prevent these drugs from causing destruction to people’s lives.” 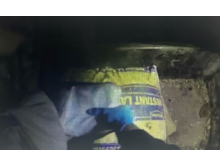