Police were called at approximately 04:30hrs on Sunday, 15 December to reports of a burglary in progress in Sutton.

Officers attended and saw a suspect running from the scene with a large knife. They pursued him on foot through surrounding gardens, and with the assistance of the National Police Air Service (NPAS), he was found hiding under a tree.

An 18-year-old man [A] was detained and arrested on suspicion of aggravated burglary and possession of cannabis.

A second 18-year-old man [B] was also arrested on suspicion of burglary and possession of cannabis.

Upon entering the house - that was in the process of being burgled - officers discovered that it was being used as a cannabis factory and contained a large number of plants.

Inspector Craig Went, from the South Area Command Unit, said: “These arrests highlight the value of a community working with police. One phone call to officers led to arrests and the recovery of a large knife.

“The drugs that were being grown at this address are in the process of being seized and will no longer find their way on to the streets of Sutton.

“I would urge anyone with information regarding the supply of drugs to come forward and speak with us.”

They men arrested were taken to a south London police station and have been released under investigation pending ongoing enquiries. 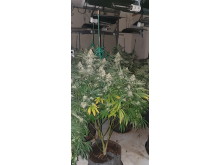