A man who tried to frame his landlord’s partner as being involved in the Westminster terrorist attack has been convicted of perverting the course of justice.

Gerald Banyard, 67 (20.01.54) of Whalley, Lancashire, sent two handwritten notes to police days after the Westminster Bridge terrorist attack which suggested that there may have been a second person involved in its planning.

Upon further investigation, it was found that the person who was being implicated was entirely innocent, and enquiries found that Banyard had sent the notes out of spite for his former landlord.

He was found guilty on Tuesday, 11 May, at Southwark Crown Court of two counts of perverting the course of justice following a week-long trial.

Banyard failed to attend the verdict hearing and a warrant for his arrest was issued by the court. He was subsequently located and arrested in Scotland on Friday, 14 May.

He is due to be sentenced on a date to be confirmed.

Commander Richard Smith head of the Met’s Counter Terrorism Command said: “In the immediate aftermath of the Westminster attack, our main priority was to establish whether the attacker might have plotted with others, and whether there was any outstanding threat. This involved scores of officers working around the clock and pursuing various lines of enquiry in order to keep the public safe.

“Banyard looked to exploit an extremely tragic and serious situation to try and settle what was a private dispute with his landlord. His actions meant that counter terrorism resources were diverted to investigate what turned out to be a completely fabricated story which implicated an innocent man. His actions were disgraceful and completely reckless and I hope this conviction demonstrates how seriously the police and courts take this type of offending.”

On 30 March 2017 – eight days after the Westminster attack – a package was delivered to the front counter of Brighton police station. In the package were two hand-written notes. The first was made out to be from an ‘American tourist’ called ‘Kevin’, and he had enclosed the second note, saying he found it in his hotel room.

The second note was addressed to “Khalid” and was signed off with a name and phone number.

The package was passed to counter terrorism detectives within the Met, who at the time were carrying out fast-time enquiries to establish whether the man responsible for the Westminster attack had acted alone, or was part of a wider network.

On 1 April 2017, another letter was sent through the post via a sorting office in Leeds. The letter had been marked for the urgent attention of Scotland Yard detectives investigating the Westminster attack. Inside, there was a further hand-written note, which stated that a named man from Eastbourne had been communicating with the attacker. The man’s phone numbers were included.

Detectives carried out enquiries on the name and the phone numbers and identified and contacted the man.

Officers questioned him about the notes, and it became apparent that he had never been in contact with the attacker as alleged.

Officers asked the man whether he could think of anyone who might have had reason to implicate him in the attack. Banyard was identified as a possible suspect as he was involved in a landlord-tenant dispute with the man’s partner over a property Banyard was renting from her.

Further enquiries were carried out and on 30 August 2018, officers executed a search warrant at Banyard’s address in Whalley, Lancashire. Officers seized various notes and documents, some of which contained Banyard’s handwriting. A handwriting expert compared the handwriting with the notes sent to police and determined that it was highly likely Banyard had written them.

Furthermore, enquiries established that Banyard was living in the Leeds area at the time the second letter was posted and processed via the Leeds sorting office.

Banyard was interviewed by officers, but denied that he had written the notes. He was charged with perverting the course of justice and first appeared at Westminster Magistrates’ Court on 24 May 2019. 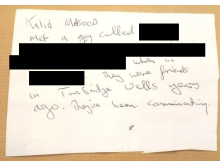 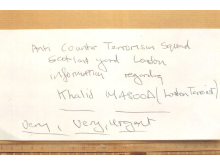