Patrolling officers from one of the Met’s Violence Suppression Units (VSU) have seized an estimated £400,000 worth of suspected drugs after stopping a car.

At approximately 16:20hrs on Tuesday, 18 August, officers from the Met’s South West VSU were on patrol in Hollybourne Avenue, Roehampton when checks prompted them to stop a vehicle.

Inside were two men who were searched, with one admitting to having a bag of cocaine tucked into his sock.

When officers searched the vehicle they found a backpack containing two blocks of suspected cocaine weighing around 0.25kgs. Both men, one aged in his sixties and another in his forties, were arrested on the spot on suspicion of possession of drugs with intent to supply.

Officers then searched a nearby property and discovered two large blocks of compressed white powder suspected to be cocaine weighing approximately 1.75kgs, along with a two litre tub of what is believed to be loose cannabis and approximately £22,000 in cash.

Following that a second address was searched where three small bags of suspected cocaine were found.

At this early stage officers from the Met’s South West drugs and violent crime taskforce have estimated that the total street value of the two kilos of suspected cocaine is £400,000. The suspected cannabis is estimated to be worth around £5,000 at street value.

A/Detective Inspector Treasa O’Donoghue, of the Met’s South West Command Unit, said: “We know that drugs are inextricably, linked to a high proportion of the violence in London and we will continue to target those who peddle drugs and target the most vulnerable within our communities.

“Those who deal drugs should know that know we are constantly on the lookout for you, we will never tire from this pursuit and we will use every available tactic to stop you.

“Intelligence-led stop and search is a vital safeguarding tactic that we use to protect the public where we believe there to be a threat of violence.

“We can’t do this alone. Community intelligence can be used to great effect to not only detect, but also prevent crime and keep London safe for us all. We need those who have information to speak to us whether directly or anonymously through Crimestoppers.”

Anyone with information can call police on 101 or tweet @MetCC. If you don’t want to speak to the police, contact Crimestoppers on 0800 555 111. 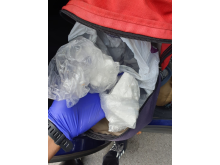