A man has been reported for COVID offences after approximately 150 to 200 people were found partying.

On Wednesday, 30 December at around 02:30hours police were called to reports of a party at an address on Crowthorne Road, W10.

This is a commercial area, multiple cars were found parked outside of a warehouse and officers could hear music coming from the building.

Officers entered the premises and discovered a 43-year-old man who told them he had just woken up.

The man was standing in front of the room where music and lots of voices could be heard. When asked who was on scene he stated he had "arranged a little party" and "we are just friends we are having a party.”

Officers gained entry to the room behind the man and found around 150 to 200 people, who all left following action by officers.

A number of knives, hammers and other weapons were found to have been discarded at the scene.

The 43-year-old was arrested under the COVID regulations for organising the illegal gathering.

He has been reported for consideration of a £10,000 fine for the breach of COVID 19 regulations

Chief Inspector David Palfrey of the Central West Basic Command Unit said: “This was a totally irresponsible act by those who either organised or attended the event. This gathering put everyone attending, their families and the wider community at risk. Attending these unlicensed events is not mischief or high spirits, it is selfish criminal behaviour and can have tragic consequences.” 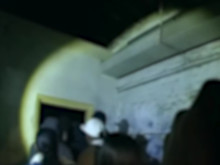