Two men have been jailed after stealing more than £40,000 in cash and perfume following a series of robberies in the West End.

The pair were convicted following an investigation by the Metropolitan Police Service’s Flying Squad.

At about 10:30hrs on 1 February 2020, a cash delivery was about to be made to a supermarket in Clerkenwell Road, EC1R. However, as the custodian got out of the van he was confront by a man wearing a yellow florescent jacket and a black motorcycle helmet, who attacked his arms and forced the victim to release the cash box.

The suspect grabbed the cash box and jumped onto a nearby waiting moped, which made off at speed. The driver of the moped was wearing a green jacket with a lighter coloured logo near the wrist.

A witness saw two men cutting the cash box open an angle grinder in nearby Marjery Street. The suspects gained access to the box, which contained £22,000. They took the money, left the box and rode away again on the moped.

Detectives from the Flying Squad began investigating and made numerous enquiries, including reviewing CCTV.

CCTV tracked the moped, still with both riders on it, enter a gated residential car park in Flaxman Terrace, about 15 minutes after the robbery. Enquiries revealed at about an hour before the robbery, two cars – a Nissan Qashqai and a Vauxhall Astra - were seen arriving in Flaxman Terrace in convoy before parking near the entrance to the carpark. Roberts was later identified as the driver of the Qashqai and Atherton the driver of the Astra.

They were seen to put on waterproof or motorcycle clothing, and a distinct yellow jacket was taken from the Qashqai and placed into the Astra. Atherton then put on a motorcycle helmet, entered the secure car park and came out a few minutes later riding the moped. Roberts, now driving the Astra, followed him and both vehicles parked in Mabledon Place. They have then both left on the moped to commit the robbery.

Sharp-minded detectives investigating the cash in transit robbery were able to link the duo to a ‘smash and grab’ robbery at a high-end department store in Marlborough Street, W1B, three days earlier.

One of the suspects – later identified as Atherton – climbed through the hole and proceeded to fill a very large, white rubble sack with more than £20,500 worth of a high-end brand of perfume and aftershave. He was wearing a black full faced crash helmet, blue top, black waterproof trousers and black gloves.

As he was leaving the venue and dragging the bag towards the moped, he was confronted by a store security guard. Atherton then produced a large ‘Rambo’ style knife and said “get back or I will stab you.”

The thieves made-off along Carnaby Street where they decanted some of stolen products and dropped the knife.

At about 01.30hrs, CCTV captured two men on a moped carrying a white rubble sack enter the car park in Flaxman Terrace. About 20 minutes later, Roberts and Atherton came out of Flaxman Terrace and walked towards Mabledon Place where they got into the Qashqai and drove off.

Shortly afterwards, the suspects approached another designer store and attempted to smash the glass front window with a concrete block. However, the suspects were forced to flee when a security guard in the road reversed his vehicle into one of the bikes, causing some bodywork or plastic trim to break off the bike. The debris from the moped was later seized by police.

The damage to the two designer stores totalled more than £45,000.

When detectives searched Roberts’ address, they recovered the clothing worn by the suspect in the shop of the ‘smash and grab’ robbery on 29 January 2020 as well as the yellow florescent jacket and a black motorcycle helmet worn by the suspect in the cash in transit robbery on 1 February 2020 and the green jacket worn by the getaway moped driver. Detectives also recovered six bottles of the same brand of aftershave stolen during the robbery of the department store.

The Qashqai captured on CCTV was also registered to Roberts. When officers searched the vehicle, they found a quantity of cutting disks - as used in angle grinders - in the boot.

The Astra captured on CCTV and seen by detectives to be driven by Atherton on several occasions was not registered to him or insured in his name. However, upon his arrest, detectives found a large quantity of parking tickets relating to the car at his home address, backing up the assertion that the car belongs to Atherton.

Forensic evidence also linked Atherton to the concrete block thrown through the window of the department store on 29 January, 2020 as well as the ‘Rambo’ knife used in the robbery which was dropped in Carnaby Street.

He was also forensically linked to one of the cutting disks found in the boot of the Qashqai and his DNA was found on the freshly cut opening of the cash box recovered in Marjery Street.

Officers also searched the car park in Flaxman Terrace where they recovered a damaged stolen moped, which was missing some of its front wheel mudguard. The debris recovered by officers in New Bond Street following the double attempted burglaries matched the damage to the moped. Atherton had been seen on CCTV walking to exactly the same spot where the stolen moped was recovered.

The court heard that the car park in Flaxman Terrace was the ‘staging area’ which Atherton and Roberts used prior to and post each offence. Neither lived at the address and could not account for why they had access to the car park.

Atherton and Roberts were both charged on 12 June 2020 and were convicted as above.

The court heard that both defendants have previous convictions for ‘smash and grab’ robberies in the West End.

Detective Constable Lenny O’Keeffe, the investigating officer from the Flying Squad, said: “Atherton and Roberts caused chaos in the West End, even threatening and using violence, in their bid to steal cash and high-value goods. Atherton even caused more than £45,000 worth of damage to two stores when he attempted to steal even more expensive goods. They soon discovered that crime does not pay and thanks to the investigative work by the Flying Squad, they will instead be spending a lengthy period of time behind bars.” 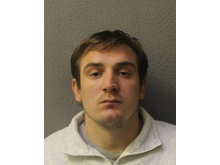 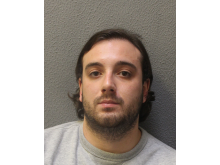 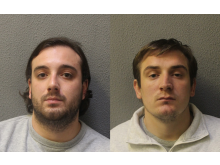 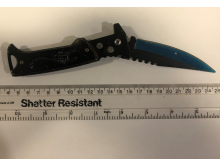 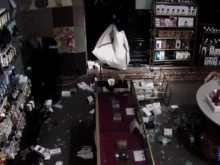 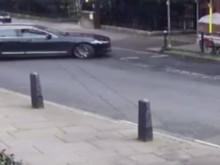 A cash delivery driver was attacked near to a supermarket in Clerkenwell Road, EC1R 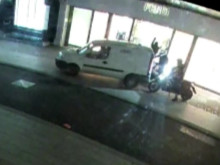