The parents of a four-week-old baby girl have been sentenced for causing or allowing their daughter’s death.

On Friday, 13 November, they were found guilty of causing or allowing infant, Eva Sanders, death.

They appeared at the same court on Friday, 11 December where they were sentenced as follows:

Police were called by London Ambulance Service at 02:37hrs on 1 September 2017 to an address in Streatham Road, Mitcham to reports of a one-month-old girl who was unresponsive.

Baby Eva was taken to hospital where she was placed on life support.

The death was initially treated as unexplained, with the Child Abuse Investigation Team (CAIT) leading the investigation.

Eva was found to have suffered non-accidental injuries to her head, ribs and one of her eyes.

Medical evidence showed that head and rib injuries were inflicted on more than one occasion during Eva’s tragically short life.

An investigation was launched by Homicide detectives led by Detective Inspector Will White, and following enquiries, Sanders and Vaitkevicius were arrested on suspicion of murder on 29 September 2017.

They were later charged by postal requisition on 3 April 2018 with murder, and with causing or allowing the death of their child, four-week-old Eva.

Detective Inspector Will White, of the Met’s Specialist Crime South, said: “This is a devastatingly sad case where baby Eva died from extensive injuries at just 28 days old.

“Medical evidence in the case was emphatic in determining that the injuries sustained were deliberate.

“No explanation was offered by either of the defendants for Eva’s injuries, and although nothing can bring her back, her parents will now face the consequences of their horrific actions.

“This was a heart-breaking loss of an innocent life at the hands of the two people who were meant to love, care for and protect her.” 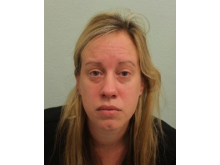