PC Charlie Guenigault, who confronted armed terrorists during the London Bridge terror attack, is to be awarded a George Medal for bravery in The Queen's civilian gallantry list.

The Commissioner of the Metropolitan Police Service, Cressida Dick, said: "That summer night whilst out with friends, Charlie ran towards danger, simply intent on protecting fellow officers and members of the public.

"Charlie's bravery undoubtedly helped others, and despite suffering serious injuries he continued without a single thought for himself.

"I know that I speak on behalf of all of my officers and staff, when I say how immensely proud we are of Charlie."

PC Guenigault, said: "To be awarded the George Medal is such recognition, is an incredible honour, and I am so humbled. Unfortunately some will not get to receive their award in person.

"I hope that I have done my friends, family, colleagues and the nation proud. I would like to thank everyone who has helped me throughout the past year - especially those who helped to save my life."
Charlie was off-duty and enjoying an evening with friends following his shift, when terrorists attacked the area by driving a van into pedestrians on London Bridge; and then indiscriminately attacking people in Borough Market.

Charlie ran towards the attackers, putting himself between them and other officers being attacked. As a consequence he received serious injuries to his head, back and stomach.

The gallantry list citation adds: "PC Guenigault was off-duty when he showed exemplary action in response to this terrorist attack. He tried to protect fellow police officers and members of the public by distracting and attempting to stop the terrorists. He placed himself in danger and was aware of the possibility of serious personal injury."

Charlie is a response officer working in Southwark, having joined the Metropolitan Police Service in 2014. 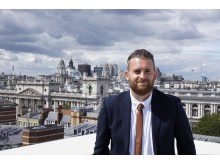