More than 300 police officers took part in an early morning operation today to smash what is believed to be a criminal network fueling an increase in the thefts of catalytic converters across London.

Found on most modern vehicles in London, catalytic converters contain precious metals, meaning they have a high scrap metal value. After they have been stolen, they are often shipped overseas for those precious metals to be removed from the car part and refined.

In the early hours of today, officers from the Met, with support from Kent Police, Essex Police, Government Agency Intelligence Network and the British Transport Police, carried out multiple raids at properties across east London, Kent and at the Essex coast.

Officers have also seized thousands of pounds worth of stolen vehicles, around fifty thousand pounds in cash and a quantity of drugs. Officers seized nine vehicles from the site in east London for using falsified license plates.

Officers also attended a metal processing plant in Hackney and discovered tens of catalytic converters believed to have been stolen from vehicles, as well as a smelting machine. Police also found what they believe to be quantities of stolen metal, likely to have originated from railways and telecommunications masts.

On the Essex coast, police officers intercepted a shipping container believed to contain stolen metal and car parts, which was due to be shipped to the Ivory Coast to be processed and refined.

Enquiries continue, with police working to arrest a number of other people also suspected of being involved in the criminal network.

Detective Chief Inspector James Stanyer, the Met’s Lead Officer for Motor Vehicle Crime, said: “The criminals involved in stealing catalytic converters often commit their offences in full view of the owners of the vehicle and other members of the public, leaving them shocked and terrorised.

“Today’s operation is the culmination of a year-long investigation led by police officers from the Met’s Neighbourhood Policing teams, working with the British Transport Police, Kent and Essex Police, and the Government Agency Intelligence Network. The intelligence gathered during this investigation will ultimately lead to more proactive work to prevent this crime and bring those involved in it to face the consequences of their actions.”

DCI Stanyer added: “The team has worked relentlessly to understand exactly how those we suspect to be involved in this crime operate and apply that knowledge to the Met’s longer-term strategies to combat criminals who commit catalytic converter theft.

“Though we know that multiple models and brands of vehicles are targeted, we are delighted to learn that Toyota has now undertaken a national catalytic converter marking programme.

“This marking scheme, which the Met has worked closely with Toyota to bring to fruition, will work at the root of the problem to minimize the opportunity for crime. Marking catalytic converters can dramatically improve the likelihood of our ability to unite stolen parts with their rightful owners.

“Police will now conduct the evidence gathering process at the sites in order to build a profile demonstrating the scale of the criminal damage these people have caused, and submit our findings to the Crown Prosecution Service.”

“This operation has involved months of collaborative hard work by GAIN and the London Regional Intelligence Partnership (LRIP), who are dedicated to disrupting and dismantling criminal enterprises. Today’s executive action is an excellent example of multiple agencies working together to have a long-term impact on the theft and international shipping of catalytic converters.”

Emma Viner from the JUWC (Joint Waste Crime Unit) said: “Working in successful collaboration with the GAIN partners, we are dedicated to tackling serious and organised waste crime, to both disrupt and take enforcement action against these criminal organisations and their harmful activities.”

Through the implementation of policies, protocols and procedures, GAIN enables government agencies to share intelligence lawfully, safely and confidently in the pursuit of tackling organised crime, Counter Terrorism and National Security targets.

The GAIN also provides a mechanism to enable different Government agencies to work together in a more formal relationship; exchanging information and jointly participating in enforcement action; joint training and sharing of resources to ensure positive, innovative intervention against organised crime groups and other targeted nominals. 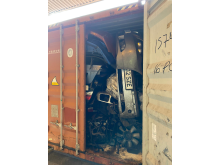 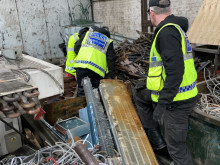 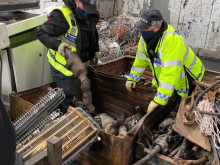 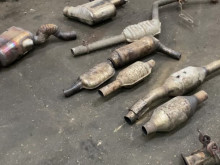 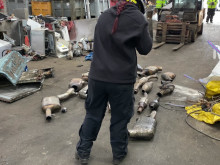