A man who organised a large house party in the basement of a building in Pixley Street, E14 has been handed a large fine by the Met.

Officers were called to the property shortly before 7.30am on Sunday 22 November. Immediately after walking into the foyer of the building, the response officers could hear the deafening music from the basement.

Walking down the staircase, the basement was in darkness, with strobe lights and other lighting systems rigged up. Likewise, a full DJ and sound system had been set up with between 40 and 50 people drinking and dancing.

Due to the seriousness of the breach, officers immediately identified the organiser of the event and took enforcement action. The man is now facing a possible £10,000 fine under the Coronavirus regulations.

Chief Inspector Pete Shaw from the Central East policing command, said: “This was such a shocking and blatant attempt to breach the regulations. We are living in a health crisis and Tower Hamlets has some of the highest infection rates within London. The behaviour by those who organised or attended this rave was downright unacceptable and risked furthering the spread of the virus.

“We will continue to take tough action against those who selfishly do not consider the wider impact of their actions, blindly taking risks and ignoring the rules which the majority of Londoners have followed admirably.” 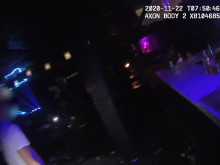 Officers dealing with a l...

Officers dealing with a large house party in the basement of a building in Pixley Street, E14