A man who followed an elderly lady out of a post office before robbing her has pleaded guilty at court.

On Monday, 26 April at around 11:30hrs, a 78-year-old woman was walking down Norwood Road, Southwark having visited her local post office.

She was unaware she was being watched by Garcia-Benitez who had been stood behind her as she had withdrawn £200 just minutes earlier.

He approached the woman and grabbed her handbag. She tried to keep hold of it but he managed to pull it away, causing her to fall heavily onto the ground.

Members of the public came to the woman's aide, including a man who had seen the incident unfold from his vehicle who bravely gave chase, causing Garcia-Benitez to throw the bag away as he fled.

Although some items were recovered, a purse containing the £200 withdrawn earlier and personal family photos was not.

Officers launched an investigation, reviewing CCTV, making door to door enquiries and issuing a media appeal. As a result, Garcia-Benitez was identified as the suspect.

He was arrested on Saturday, 19 June and charged with one count of robbery before appearing at Westminster Magistrates' Court on Monday, 21 June.

He was bailed to appear at Inner London Crown Court on Monday, 19 June where he pleaded guilty as above.

He will be sentenced at the same court on Wednesday, 8 September.

Police Constable Alex Earley, investigating officer, said: "The victim in this case was fortunately not seriously injured, but was left upset and shaken. It is incomprehensible to me that someone could commit this crime against such a vulnerable and defenceless victim, leaving her to lie in the street.

"My team and I gathered a significant amount of evidence - so much so that Garcia-Benitez had no choice but to plead guilty. I hope this brings the victim a sense of justice and closure so she can start to move past what happened." 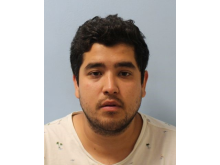