The operation took place on Friday, 22 June and involved around 60 officers attending addresses and patrolling in transport hubs across London, in order to trace outstanding offenders and engage with commuters.

Officers worked with Transport for London (TfL) staff, officers from British Transport Police (BTP) and various external community partners to promote the reporting of hate crime and to highlight to the public that this behaviour should not be tolerated.

As a result of the day’s action seven men were arrested for offences including, possession of a firearm, fraud offences, drugs offences, theft, and Breach of a Community Behaviour Order (CBO).

Officers in Harrow recovered a lock knife and drugs during their patrol in Wealdstone.

Across London officers also carried out community engagement. They distributed literature offering advice on what constitutes a hate crime and how to report it to police, or through partner agencies such as Galop and TellMAMA.

"We work in partnership with TfL, BTP and our communities raising awareness and encouraging the reporting of it. Hate crime should not be tolerated. If you witness a hate crime or are a victim of hate crime, report it.”

Steve Burton, Director of Compliance, Policing and On-Street Services at TfL, said: “Hate crime has no place in the capital, and will not be tolerated on our transport network or our streets. Everyone has the right to travel without fear of abuse or intimidation and if anyone witnesses or is victim to hate crime they should report it immediately. We work closely with the police and communities to eradicate these types of crimes, encourage reporting and bring offenders to justice. London's transport network remains a safe, low crime environment, but reports of hate crime offences have increased as more people feel confident to speak out about incidents.”

Hate crime is still hugely under reported and no one should suffer in silence. These incidents may involve a physical attack, damage to property, bullying, harassment, verbal abuse, insults or online abuse using social media. Types of hate crime can include, anti-Semitism, homophobia and Islamophobia, transphobia and disability hate crime.

If you or someone you know is suffering hate crime, or has suffered hate crime in the past, please contact police on 101. You can also report hate crime through the MPS website. In an emergency always dial 999 . Find out below how to spot a hate crime, report it, or get help, support and advice – both online and in your community: www.met.police.uk/advice-and-information/hco/hate-crime 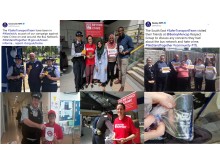