A prolific phone-snatcher has pleaded guilty to seven offences two days after he was arrested by officers in Hackney.

Officers had gathered evidence that linked Brew to the seven cycle enabled robberies between Wednesday, 5 – Sunday, 9 May in the Islington, Hackney and Tower Hamlets areas.

He was charged with seven counts of robbery on Tuesday, 8 June and due to the weight of of the evidence against him, pleaded guilty to all offences at the first opportunity at Wood Green Crown Court.

Brew was remanded in custody to appear for sentencing on Tuesday, 6 July at the same court.

Sergeant Vincent Boughton from the Central East Robbery Taskforce, said: “My team and I gathered an overwhelming amount of evidence against Brew - so much so that pleading guilty was his only clear option.

"I am pleased that his victims will be spared the upset of a trial and hope that they can begin to put the incidents behind them."

Crime prevention advice on how to avoid being the victim of robbery is available here: https://www.met.police.uk/cp/crime-prevention/protect-yourself-from-crime/ 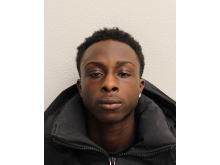