Officers from the Met’s Specialist Crime Command have recovered a Skorpion submachine gun and approximately 200 rounds of ammunition following a pre-planned firearms warrant in Northolt.

In the early hours of Thursday, 29 April, and with the assistance of specialist firearms officers, a warrant was carried out a residential address in Northolt.

Three people, aged 19, 32 and 42 years old, were arrested on suspicion of possessing a prohibited weapon with intent to endanger life.

They have been taken into police custody where they remain.

Detective Inspector Jim Casey, from the Specialist Crime Command, said: “The damage that a weapon like this can cause can be life-changing, if not life-ending.

“Recovering this weapon is another win for the Met Police who continue to be relentless in pursuing those involved in firearms offences. There’s absolutely no reason anyone in this country should be possessing such a dangerous piece of metal.

“I would ask anyone who knows anything, or has any information about lethal guns being hidden or moved around London to report it to the police, or anonymously to Crimestoppers on 0800 555 111.” 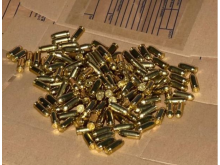 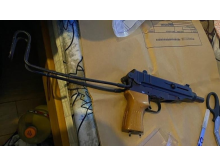