Police found 30 shotgun cartridges hidden in a stairwell ceiling in Battersea during a weapons sweep.

The weapons were recovered by officers from the Met’s Violence Suppression Unit on the morning on Monday, 26 July, the first day of enhanced activity to tackle firearms offences in London.

The team were carrying out a number of weapons sweeps around the Surrey Lane Estate area, SW11. As the officers were walking up a stairwell they noticed the corner of a ceiling tile was loose.

Upon closer inspection they found a carrier bag which contained the ammunition.

It was taken to a secure location and enquiries are now underway to identify who placed them there.

Detective Inspector Richard Mullan, from the Met, said: “Within hours of the Met upscaling its focus on firearms for the week, we have recovered 30 shotgun cartridges that someone clearly didn’t want us to find. There’s no other logical explanation for them to be stuffed in a communal ceiling.

“Whilst this is a fantastic start to the week of upsurge that the Met is carrying out, we constantly react to intelligence and information when provided to us. Our work will now continue to identify who placed these bullets in the ceiling and if they have access to a shotgun. Our work has not ceased now that we have taken the bullets.”

Information on how to report a suspected firearms discharge, or to provide information to the police on where firearms are being stored or who is in possession of a weapon can be made via 999, by tweeting @MetCC or via our website.

Alternatively we strongly encourage anyone with information to contact Crimestoppers. They never ask your name and they cannot trace your call, your IP address or the device you use. Fill in their quick online form or call 0800 555 111. It could save a life.

In the first six months of 2021, the Met has seized 248 firearms; of which 151 were handguns, three were machine guns and two sub machine guns 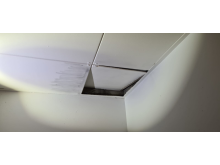