Officers have worked hard throughout the European championship to keep people safe so they could enjoy the events, which saw England reach the final last night, Sunday 11 July, at Wembley Stadium.

Ahead of the 8pm match, a large scale policing operation was in place across London, and at Wembley to ensure that people were able to celebrate the match safely.

Crowds gathered from early in the morning to celebrate the match, and overwhelmingly the majority of people were able to watch the match safely.

Despite appeals not to, a number of people travelled to Wembley who did not have tickets. Officers, including those from the Mounted Branch and the dog unit, worked with Wembley Stadium officials and stewards to respond quickly to any outbreaks of anti-social behaviour and disorder, to ensure those with tickets could access the stadium.

Just before the match started, a group of people did breach an outer perimeter security cordon and gain entry into the stadium without a ticket. Officers worked quickly to identify these people and to assist with ejecting them from the stadium.

Officers have so far arrested 86 people following yesterday’s operation, 53 at Wembley, for a number of offences including public order offences, ABH, drunk and disorderly and criminal damage. A total of 19 officers received injuries.

In total across the tournament there have been over 130 arrests.

“Throughout the course of the Euros tournament, the vast majority of people have watched the matches responsibly and safely, and enjoyed the build up to last night’s final.

“However, the unacceptable scenes we saw yesterday were a small number of people intent on using the football as an excuse to behave appallingly towards other members of the public and officers.

“The reports of online hate crime abuse are utterly abhorrent and totally unacceptable. We have launched a post-event investigation and will actively pursue and investigate offenders and criminal offences.

“This behaviour is not welcome in London and I urge anyone who is being subjected to any abuse, both online and in person, to contact police and report it so the police can investigate thoroughly and accordingly.” 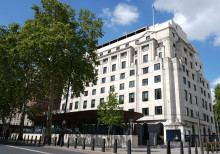