A police appeal to recover stolen artwork destined for Hackney residents has resulted in thousands of the prints being returned to the artist who created them.

Hackney-based artist, Stik, produced 100,000 prints of his “Holding Hands” creation for those living in the borough as a gesture of kindness during the pandemic, and following the installation of the Holding Hands sculpture in Hoxton Square.

His intention was to provide every household with a copy of the poster as a gift to either keep or sell.

The prints were to be distributed via the council-issued publication Hackney Today and were delivered to the distributor on 19 September.

But whilst some households received their copy; it became apparent that the prints failed to reach a large number of residents.

The matter was raised with Hackney Council and reported to police, who launched an investigation.

On Monday 26 October, with the support of STIK, police issued an appeal urging for the safe return of the artwork.

Since the public appeal, around 4,000 prints have been returned to the artist. An additional 1,000 prints were returned before the appeal was made.

STIK said: “‘Holding Hands’ shows two people looking in opposite directions yet holding hands in a symbol of universal love and solidarity. The fact that so many prints were returned to the people of Hackney only amplifies it's meaning.”

Detective Constable James Readman, said: “It is really encouraging that the public have listened to our appeal and done the right thing by returning a large proportion of the prints. Hopefully, they were struck by the fact that STIK was doing something really nice for his fellow Hackney residents - funded out of his own pocket - because he wanted to bring a smile to people’s faces, during what has been an incredibly difficult year for most. Unfortunately, some individuals saw an opportunity to make money and took it. But we are pleased with the response and understand STIK has begun the process of distributing the prints to the rightful recipients.” 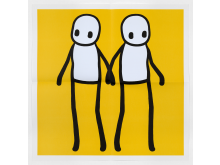 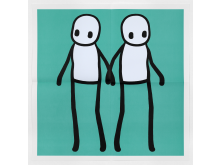 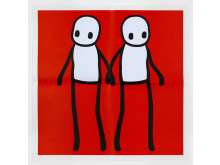