Met officers have returned 240 culturally significant specialist books worth in excess of £2.5 million to their rightful owners following a joint operation with Romanian authorities.

The books had been stolen in January 2017, during a highly sophisticated burglary in Feltham, London. The books, which include works from the seventeenth century by Italian astronomer Galileo; Sir Isaac Newton; and the eighteenth century Spanish painter Francisco Goya have, with the exception of four, all now been recovered. Those stolen have a combined value of around £2.5 million and are deemed to be of international importance and are irreplaceable.

Detectives from the Met’s Specialist Crime South travelled to Bucharest in Romania last month, to formally carry out identification of the books. They met with four of the five victims, along with Romanian police officers within the Directorate for Investigating Organised Crime and Terrorism (DIICOT), at the National Library of Romania.

The identification was hosted by experts from the library, who also assisted in the storage of the books and were integral in their safe recovery and return to their owners.

Unfortunately, 83 of the books recovered suffered some damage, ranging from slight to severe. The damage mainly consisted of damage from water and mould due to how the books had been hidden underground, and broken spines believed to be from poor methods of transportation.

Twenty-eight were assessed as having substantial damage and two books were so severely damaged they have been initially assessed as being beyond repair.

Following the identification it has since been confirmed that four of the stolen books were not recovered. They are:

- A collection of nature pressed butterflies by NAWA, valued at around £4,000.

Detective Inspector Andy Durham, who led the investigation, said: “It was lovely to see the joy of each victim being reunited with these irreplaceable books. In particular, the moment when one of the victims - Alessandro Bado – set eyes on the books at the library, and once he had seen the condition of a few of the most important books that he was emotionally attached to, he was so happy and said with great gusto: “Tonight we drink like Lions”. This made my day, seeing his reaction and joy.

“Four books remain missing and I would ask anyone with information about their whereabouts to contact my team on +44 (0)7741703053.”

Met officers have worked for over three years, in conjunction with officers from the Romanian National Police acting under direct guidance of DIICOT and Italian Carabinieri for the Protection of Cultural Heritage, supported by Europol and Eurojust, on the international operation to recover the books and bring the offenders to justice.The books were transported to Romania by an organised crime group, who were all Romanian nationals. The men, twelve in total, were jailed at Kingston Crown Court in early October for the commission of burglaries at commercial premises across the United Kingdom.

Alessandro Riquier, from Italy, said: “After three-and-a-half years, finally this terrible story has a very happy ending. I went to Bucharest full of hope but also a little bit scared about the damaged books. I was very excited and it was a great joy to handle my books again and to see that apart from one missing, and four books with variable damage, all the books were in good condition. Everybody was happy, the UK Metropolitan Police officers, the members of the Romanian Police and the Carabinieri, were all fantastic in achieving this great result. My special thanks go to them all.”

Natalina Bado, from Italy, said: “The experience of returning the books was very positive and exciting. Reviewing and touching our books three years and nine months after the theft was a profound joy. Every time we were about to view a book we had many expectations regarding the conditions and when we found our works in good condition it was a great happiness for us, just as it was a deep pain to see some damaged books, a feeling partly shared also from all of you and the library staff.

“The police departments, Metropolitan Police and Inspectoratul General al Poliției Române, who dealt with the case were extremely courteous and welcoming, as were the staff of the National Library in Bucharest.”

Anyone with information about the whereabouts of the missing books can also call police on 101 quoting Cad 4340/05Nov20 or by contacting Crimestoppers anonymously via 0800 555 111. 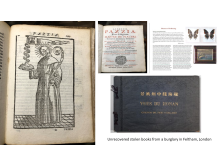 Three of the outstanding ... 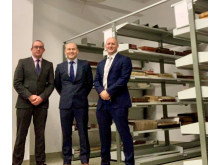 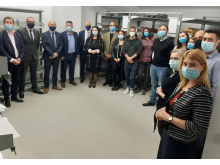