Following a proactive vehicle stop on Tuesday, 17 November, officers have seized what is believed to be 48, 0.5kilogram blocks of heroin that were concealed in a cement block.

A 32-year-old man from east London was arrested at the scene on suspicion of being concerned in the supply of Class A drugs. He was taken into police custody where he remains.

The vehicle stop was by marked police vehicles in Dagenham.

Commander Dave McLaren , from the Met’s Specialist Crime Command, said: “This demonstrates the extent criminals will go to in order to conceal drugs trafficking activity from police. However we are committed to being one step ahead of these types of criminals to make sure we remove drugs from streets of London.

“Drugs supply is a driving factor in the levels of violent crime and by taking 48 blocks of suspected heroin out of the hands of criminals we will have made a major blow to organised drugs supply networks.” 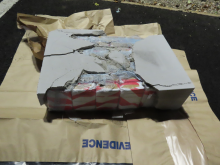 Drugs recovered from the ...