The hospital currently has more than 300 patients battling the virus and when the Wellbeing Team at the hospital requested a visit from PD Dexter, PC Mike Sheather jumped at the chance.

PC Sheather, along with local officers from Tower Hamlets and Hackney, visited the RLH on Tuesday, 26 and Wednesday, 27 January with treats and a thank you book containing messages from Met staff alongside Dexter, who was ready to provide cuddles.

PD Dexter’s handler, PC Sheather, regularly takes the two-year-old Labrador to visit officers from all walks of the Metropolitan Police Service, ranging from firearm units and local neighbourhoods teams to counter-terrorism and public order officers, giving them the opportunity to pause with PD Dexter and take stock of what can be a stressful job.

PC Sheather started the wellbeing scheme within the Met last March, just before the pandemic hit, and their visits across the Met have been welcomed with open arms.

PC Sheather, from the Met’s Taskforce, said: “Usually Dexter’s diary is filled with wellbeing visits to police officers and staff, across the Met, but when the conversations started on whether we could support our colleagues at the Royal London Hospital, I felt it was extremely important for us to go.

“The nurses, Health Care Assistants, cleaners, porters, doctors and many others in their various roles have been working for months and months, non-stop, through both waves of the pandemic putting other’s health before their own.

“If we can visit and give staff some light relief by having some time to meet Dexter then that’s the least we can do.”

Dexter spent time with staff as they took their much needed breaks in specially designated wellbeing breakout locations dotted across the hospital, bringing some comfort and distraction to their days.

Marc Robinson, part of the Royal London Hospital Wellbeing Team, said: “Along with the Metropolitan Police we have been able to deliver a bespoke intervention to try and support staff wellbeing and psychological safety.

“The dedicated wellbeing police dog along with wellbeing champions from the Met helped provide opportunities for staff to decompress and process traumatic experiences in a COVID safe way outside of our clinical areas.

“Our wellbeing team and senior nursing staff have also been able to provide support, reassurance and guidance along with signposting to the many support mechanisms on offer to staff.

“Many staff end their working day with little positive to reflect - Dexter gave something positive to focus on. Smiles and positive energy among staff was palpable. It's been humbling and heart warming to be a part of such an action to promote wellbeing in what's been such a challenging time at the hospital.”

Dexter’s visit has already had an impact, opening up conversations on wellbeing among hospital staff who have since been signposted to the wellbeing and psychological safety support that is available. 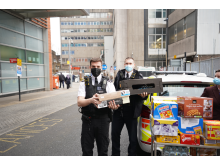 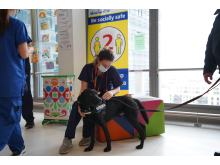 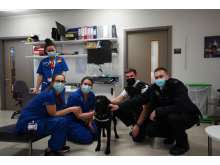 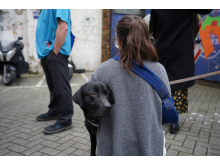