The 16-year-old appeared in custody at Willesden Magistrates' Court on Wednesday, 18 November charged with murder and possession of an offensive weapon.

He was remanded to a Youth Detention Centre and will next appear at the Old Bailey on Friday, 20 November.

An investigation was launched by the Met's Specialist Crime Command after police were called to reports of a stabbing in Northwick Park at 15:50hrs on Thursday, 12 November.

Despite the best efforts of emergency services, he was pronounced dead at 16:31hrs. 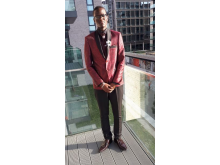