A teenager has been convicted in connection with the murder of 15-year-old schoolboy, Baptista Adjei, in Newham.

On Tuesday, 11 August, two 16-year-old boys appeared at the Old Bailey where [A] was found guilty of murder and wounding and was remanded in custody to appear for sentencing at the same court on Friday, 25 September.

[B] was found not guilty of all counts and was released.

The court heard that on two to three weeks before the murder, the victims, Baptista Adjei and his 15-year-old friend, had become involved in an online disagreement in a Snapchat group chat with the defendants who were only vaguely known to them outside of the online forum having seen the boys around the Stratford area.

The interaction began as mutual banter, but eventually turned ugly.

The boys had begun by taunting each other, culminating in a brief online exchange; [A] messaged Baptista saying “If you’ve got no bodies on your blade, leave the group chat.” Baptista had replied, “Shut up. You’ll be the first.”

This exchange continued between both victims and both defendants ending with [A] threatening to be outside the victim’s school waiting for them at 15:25hrs the following day.

He was not waiting for them when they finished school. Weeks later, on the day of murder, 10 October 2019, Baptista and his 15-year-old friend took the bus towards Stratford.

[B] was on the same bus. He [B] spoke with Baptista briefly on board the bus, all the while he was on the phone to [A] which lasted over five minutes. The prosecution submitted that he was directing [A] to board the correct bus.

Officers investigating the murder saw on CCTV, [A] calmly pull a balaclava over his face while wearing a blue latex glove. As Baptista and his friends made their way down the stairs of the bus, they were caught completely unaware. He stabbed them both with a 10” combat knife.

Baptista was stabbed twice in the chest. The blade punctured his lung and his heart. Not realising the severity of his injuries, he ran off, making it as far as Stratford Centre before collapsing.

Despite the efforts of medics, Baptista died from his injuries at the scene at 15:49hrs.

Baptista’s friend was stabbed once in the arm and once in the leg, he was taken to an east London hospital by the London Ambulance Service where he remained for almost a week following the incident. He has since made a full recovery.

Word of the murder spread quickly on social media and through the community.

On 11 October 2019, members of [A]’s family, who had themselves heard the rumours, confronted [A] who admitted the attack on both victims. He was subsequently presented to police at Forest Gate police station by his mother.

On 12 October 2019, he was charged with Baptista’s murder, grievous bodily harm with intent in relation to the second 15-year-old victim and two counts of possession of an offensive weapon. He was remanded in custody.

Detectives established that [B] was on the bus taken by the victims. This was supported by his Oyster Card records. In addition, checks on his mobile phone showed that he had called [A], from the bus, shortly before the murder took place.

On 16 October 2019, [B] was charged with conspiracy to murder [under joint enterprise]. He appeared at Stratford Youth Court where he too, was remanded in custody.

DCI Chris Soole, who led the investigation, said: “After killing Baptista and seriously injuring his friend, the killer took a bus back to his home in Manor Park.

“I am saddened that anyone can be of a mind-set where murder is considered an appropriate response to chat room banter or name calling.

“My thoughts are with Baptista’s family and friends and I sincerely hope that today’s verdict brings them a measure of peace at this saddest of times.”

Case Officer, Detective Sergeant Suzanne Soren, said: “For [A]’s mother to confront her son and make the decision to make him face the consequences of his actions must have taken considerable bravery. Her actions gave Baptista’s family the chance to get justice and some semblance of closure. She should be commended for making that decision, which was right and just.

“The ripples of such extreme violence reach far beyond those immediately involved causing fear and concern. The effects are devastating for our communities who too often are left to try and make sense of what is senseless.

“As Baptista’s family strive to live with their unimaginable loss, the defendants and their families will mourn their own futures together, so quickly lost with an imagined insult, and the point of a blade.

“This case is a sad and tragic example of a low level dispute escalating into the most serious of crimes and is cautionary tale for any young people who are tempted by a lifestyle of knife-carrying and violence. There is no glamour, ultimately, there is only loss.”

A spokesperson for Baptista’s family, said: “Naturally we are disappointed with the verdict in relation to [B]. We accept the verdict for [A], we await the sentencing. Nothing and no sentence will bring back Baptista. We want this to be a lesson to those who glamourise this type of crime to bear in mind the long lasting damage it can do to the families involved.” 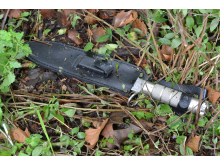 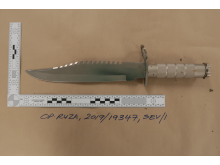