A man who was involved in two aggravated burglaries in north London in which elderly residents were threatened with screwdrivers has been jailed.

Michael Maughan, 18 (5.08.02) of Great Cambridge Road, Enfield was sentenced at Wood Green Crown Court on Friday, 14 May to a total of eight years’ imprisonment.

Detective Constable John McGranahan, who led the investigation, said: “Maughan, and his accomplices, terrified their elderly victims in their own homes, a place they should have felt safe.

“The level of violence used was truly shocking, and I cannot even imagine what must have been going through their victims’ minds. To target the vulnerable is abhorrent; he has stolen their property and their independence.

“Maughan tried to evade justice by absconding during his trial, however, we were able to track his movements and bring him back before the court. Today, he is beginning a lengthy prison sentence which is rightly deserved.”

On 28 February 2020, two men knocked on the door of a house, belonging to an elderly couple, in Hermitage Road in Haringey. The 83-year-old woman answered the door and was pushed out of the way by the men, both carrying screwdrivers.

They demanded property and tried to pull the woman’s rings from her fingers.

One of the suspects then removed the 79-year-old man’s pyjama top before smearing fabric conditioner on his chest, causing a burning sensation. The men left with a small amount of jewellery.

Detectives launched an investigation and a full forensic examination was carried out at the scene.

Later that morning, two men smashed their way through a patio door whilst their 84-year-old victim cowered inside her home on Wilbury Way in Edmonton. The woman was captured on her home surveillance system trying to flee from the two men, and her screams were recorded as they caught up with her.

She was threatened with a large screwdriver as the suspects demanded money before carrying out an untidy search of the home.

After the suspects left with a few collectible coins, the woman was able to alert a neighbour who called police.

Detectives launched an investigation into this offence and it was quickly established that the suspects had been involved in the earlier burglary.

Officers were able to identify a vehicle that was believed to have been used by the suspects. It was caught on ANPR in Hertfordshire an hour after the burglary. The car was found abandoned in Brighton after it had been stolen approximately two weeks prior. The contents of the car were taken away for additional forensic tests.

DNA found on a drinks bottle was identified as belonging to Maughan; he was circulated as wanted across the Met and warrants were executed at several addresses.

On the evening of 24 June 2020, officers stopped a car on Muswell Road, N6 and Maughan was found to be a passenger.

He was taken to police station and charged the following day with two counts of aggravated burglary, aggravated vehicle taking and possession of an offensive weapon.

DC John McGranahan, added: “Despite Maughan’s conviction, our investigation is not over. We are still making enquiries to establish who else was involved. I would urge anyone who has information that could assist to please come forward. Consider the impact a crime of this nature would have on your parents, or grandparents, and do the right thing.”

Anyone with information is asked to contact police via 101 quoting reference Cad 2823/28Feb20. Alternatively, call Crimestoppers anonymously on 0800 555 111. 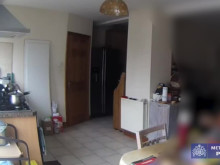