“The Met is prepared for the Euros 2020 matches in London,” says Deputy Assistant Commissioner Laurence Taylor as London looks forward to football fever this summer.

The Met has been planning for the Euros 2020 for some time, working with key partners in Union of European Football Associations, the Football Association, the Mayor’s office, and with policing partners in Counter Terrorism Policing, British Transport Police and City of London Police to ensure people and fans are safe and secure, prevent crime and disorder and respond effectively to any incidents.

A great many borough police officers will be on duty during the tournament, tackling any arising issues specific to their communities.

There will also be a full range of officers from Public Order, the Central Football Unit, Territorial Support Group and Project Servator, Mounted Branch, Dog Unit, Firearms Unit, Air Support, and the Marine Unit to respond to any crime or critical incidents which may occur. Plain clothed spotters within the crowds will be in place to identify any troublesome fans.

Already in preparation, Met licensing officers have been visiting pubs, bars and other venues showing the matches to talk to staff and train them in how they can help keep their customers safe and deal with any arising disorder and anti-social behaviour, particularly as a result of excessive drinking.

Also, as part of its commitment to protecting those who are vulnerable or at risk, which is a Met policing priority, officers have advised venues how to prevent and reduce sexual violence and how staff can create safe environments for female customers.

In addition they were told what they should do if an incident occurs, including protecting vital evidence, securing CCTV and how to protect the victim.

Deputy Assistant Commissioner Laurence Taylor said: “The Euros is an internationally important event with its own unique policing needs and draws upon expertise right across the Met.

“We have a very experienced policing team in place and will be deploying a great many officers on the boroughs. We will also have a great many specialist units to prevent crime and disorder and respond effectively to any incidents or over-crowding.

“London remains in a public health crises and we must all still take action to stick to government guidelines on social distancing and gatherings. Please, only come to London if you have a ticket for a match, fanzone or somewhere safe to watch the match. There are no alternative sites for fans to gather in large numbers and there are limited spaces in pubs and bars.

“I should also remind you that the terror threat remains at 'substantial'. This means that an attack is likely and I am asking the public to play their part toward security by remaining vigilant and reporting any suspicious activity or behaviour to stewards, security staff or police officers. In an emergency always dial 999.

“Our policing plan also has a particular focus on tackling domestic abuse, violence against women and girls, and hate crime – all of which are Met priorities. We will bring such offenders to account and support victims. We encourage anyone who is suffering at the hands of an abusive or violent partner, or knows someone who is, to call us on 101 or in an emergency 999.

“We want people to look out for each other and enjoy the Euros safely and securely. We are prepared and will be a highly visible and alert presence throughout." 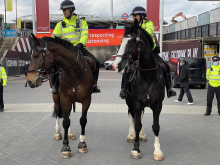