Detectives have released two images of a man they would like to speak to in connection with a sexual assault in Greenwich.

She got to Highbridge Wharf, near the Trafalgar Tavern Pub, when she was approached from behind and sexually assaulted by a man.

The victim fought back and the attacker fled along Eastney Street SE10. He was last seen on CCTV walking into Lassell Street, SE10.

The suspect is described as a white male with brown ear length hair in curtains, wearing black Adidas tracksuit with white stripes along the arms and legs.

Detective Constable Ellie Cordery, of the South East Command Unit, is investigating. She said: "This was a distressing and frightening incident for the victim, who was on her way home after socialising with friends. She is being supported by specially trained officers.

"We would like to hear from anyone who recognises the man in the images captured. While we appreciate they might not be the best quality, we are hopeful that someone may recognise him and come forward.”

Anyone who has information that could assist police is asked to call 101 ref CAD 1679/26JUN20. 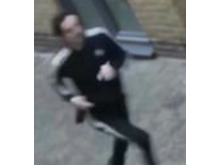