At approximately 18:15hrs on Thursday, 11 February, officers from the Met’s Violent Crime Task Force (VCTF) were called to reports of males armed with baseball bats damaging vehicles on Admiral Close in Orpington.

The report stated that the men were wearing balaclavas and armed with weapons while vandalizing multiple cars in the residential area before making off in a vehicle.

Officers attended the scene and conducted an area search for over an hour before locating a vehicle matching their description.

Upon seeing police, the two men inside the car quickly ran off.

A foot chase ensued before the men - both 22 years of age - were detained and subsequently arrested on suspicion of possession of an offensive weapon. They were taken to a south London police station and have since been bailed to a date in early March pending further enquiries.

Officers then proceeded to search the vehicle, and in doing so, recovered an array of weapons including a large machete, a baseball bat and a sling shot with ball bearings.

PC Matt Murrant, said: “These arrests serve as evidence of the zero-tolerance approach the Met takes towards violence in any form. Thanks to the persistence of these officers, an array of dangerous weapons - including a knife - have been removed from our streets.

“Removing horrendous weapons like these and tackling violent crime remains our top priority. There is no excuse for carrying knives and officers will continue to be out there detecting criminality and bringing those responsible to justice.”

+ If you have any information about knife crime, please contact police or Crimestoppers on 0800 555 111 – your anonymity is guaranteed. They are a totally independent charity and you remain 100 per cent anonymous, they never ask your name and they cannot trace your call, your IP address or device you use. Alternatively, visit their website. 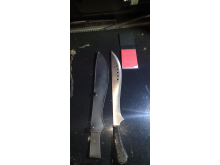