Officers from the Violent Crime Taskforce [VCTF] seized drugs and arrested two men for drug supply after they were stopped in Acton.

At 16:00hrs on Tuesday, 27 October officers from the VCTF noticed a passenger on a moped not wearing a helmet while riding in an area known for moped robberies.

Officers stopped the moped on First Avenue and detained the rider and the pillion passenger, both men aged 23 [A] and 19 [B] respectively, for a search.

Subsequent searches at one of the home addresses revealed suspected ecstasy and MDMA – the substances await testing.

Both males, [A] and [B], remain in police custody.

Detective Inspector Domenica Catino of the VCTF said: “Our officers are patrolling in areas known for violence and drugs and are actively seeking to target those who cause harm and distress in our community.

“Thanks to the use of stop and search, we have taken a significant amount of drugs off the streets and prevented them from fuelling associated violence.” 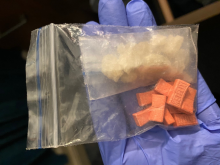