Two men have been convicted following the 2019 fatal shooting of a man in an east London snooker club.

Jeton Krasniqi, 27 (31.12.93), of Kershaw Road, Barking and Dagenham, was found guilty at the Old Bailey on Tuesday, 25 May of the murder of 27-year-old Grineo Daka. He was also convicted of possession of a firearm, and wounding with intent to cause grievous bodily harm (GBH) in relation to another man.

Edison Brahimi, 30 (16.06.90), of Camden Road, Islington, was found guilty of perverting the course of justice.

They will be sentenced at the same court on Friday, 25 June.

Detective Chief Inspector Mark Wrigley, of the Specialist Crime Command, said: “Grineo Daka was lured to the snooker club that night, before his life was taken in an act of reckless violence; today, we have seen the man responsible convicted of his murder.

“Krasniqi went to the club 24 hours after an argument in order to seek revenge, ensuring that one of his friends brought a firearm with him. The club had about 50 people in it that night, and it is only by pure luck that more people weren’t injured or killed. The two additional discharged bullets that were recovered by our forensics team could quite easily have struck other people.

“Krasniqi’s intent that night is quite obvious. He was wearing gloves on a summer’s night; clearly, he was hoping to prevent his fingerprints from being found on the murder weapon. However, unbeknownst to him, his movements after the murder were captured on CCTV.

“The Met is committed to tackling serious violence, and I would urge anyone who has information relating to firearms possession to make contact with police, or anonymously via Crimestoppers.”

Grineo Daka, who was aged 27 and from Stratford, was shot in the back in the early hours of 7 July 2019; he was pronounced dead at the scene.

A post-mortem examination held at Walthamstow Mortuary on 9 July 2019 gave the cause of death as a single gunshot wound.

Detectives from the Specialist Crime Command launched an investigation. They established that shortly after midnight on 6 July 2019, Grineo had been in the Phoenix Snooker Club on Lea Bridge Road, E10. He and some friends had been involved in an altercation with another group, one of whom had been struck with a bottle.

In the early hours of 7 July 2019, Grineo, who was again with friends, arrived at the club – after receiving a phone call – and made his way to the upstairs bar. The defendants, and two other men, were already there.

At approximately 03:00hrs, a fight broke out and pool balls were thrown. Four shots were also fired from a gun that had been smuggled into the venue. Grineo was fatally injured, and died just 30 minutes after his arrival. One of his friends was also shot in the foot, and two other bullets were found inside the club.

In the ensuing melee, the occupants of the club, who were fleeing in fear of their lives, ran past Grineo as he lay dying close to the stairs.

Krasniqi, who was wearing gloves despite it being July, was captured on CCTV footage accessing a balcony area before throwing an item towards neighbouring gardens – a converted firearm was recovered by a police officer two doors away. A bullet was jammed in the chamber and a second bullet remained in the magazine; forensic examination confirmed this to be the gun used in the murder.

The four men then stepped over Grineo before walking to a car parked nearby and driving away.

Detectives carried out an extensive examination of CCTV footage and mobile phone analysis. They were able to identify the four men and enquiries were made to locate them. Despite searching addresses linked with the men over a period of time, it was believed that they had gone to ground.

On 6 December 2019, Brahimi was arrested after being traced to an address in Westminster. He was charged with murder the next day. Following further consultation with the CPS, the charge was later amended to perverting the course of justice.

A manhunt was launched to trace Krasniqi; he was arrested in Dagenham on 25 May 2020, and charged the following day with murder, possession of a firearm, and wounding with intent to cause GBH in relation to another man.

A third man, who was present in the club, was charged in July 2019. He died whilst awaiting trial.

A fourth man remains outstanding and enquiries are ongoing to locate him. 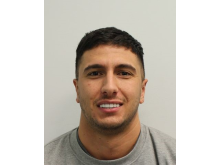