Two men have been jailed for the organised supply of cocaine with an estimated street value of £5 million.

Both men appeared at Snaresbrook Crown Court on Monday, 23 November after pleading guilty earlier this month to conspiracy to supply Class A drugs. They were sentenced as follows:

On Wednesday, 20 May, detectives from the Met’s Specialist Crime team were carrying out surveillance near Basildon in Essex when they witnessed a Lithuanian registered HGV and a UK registered Mini Countryman in convoy driving along the A127.

Both vehicles were seen to park in a lay-by on the London bound carriageway. A Lithuanian national, Laimutis Vikerta, the driver of the HGV was seen by officers passing two large suitcases to the driver of the Mini, Vicrahdeep Sahota, who then placed them into his vehicle.

The vehicles was stopped by officers and the men were detained for the purpose of a drugs search. During the search officers seized 49 kilograms of cocaine, located in the two suitcases.

Both defendants were charged and pleaded guilty at the same court on Tuesday, 10 November.

Detective Inspector Jim Casey, from the Met’s Specialist Crime Command, said: “This is a significant seizure of high purity cocaine which would have no doubt caused hardship and misery across all the communities of London and beyond. As a result of my team’s professionalism and commitment to keeping all communities safe this has not been allowed to happen.

“I hope that these sentences serve as a deterrent to those involved or thinking about getting involved in the supply of controlled drugs on the streets of London.” 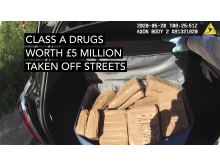 Drugs found in the suitcases 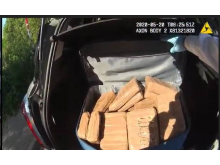