Abdullahi Fidow, 35 (07.07.1985) of Moston Close, Hayes, was sentenced to 17 years in prison for offences including modern day slavery, supplying cocaine and heroin, wounding with intent, possession of an offensive weapon and actual bodily harm.

Mohammed Hassan, 38 (26.06.1982) of Bethany Waye, Feltham was sentenced to 12 years in prison for modern day slavery offences and supplying cocaine and heroin.

On 11 October 2019, officers were called to the scene of a stabbing.

An investigation was underway when police were called on 15 October 2019 to Victim [A], a 29-year-old man, who reported that he had been held against his will for five days by a group of men. He said he was scared for his life and had been physically assaulted.

Victim [A] also alleged that he had witnessed a stabbing committed by Fidow and positively identified him.

A further investigation was carried out by West Area CID following the arrest of Fidow in the home address of Victim [B], a 58-year-old man.

Detective Constable Radford gained the trust and confidence of Victim [B] who disclosed to her that he had been forced to allow a gang to use his home and to deal drugs out of his flat by them.

An operation was launched by officers from across the West Area, along with Hounslow Council and other partnership agencies, who took part in the execution of thirteen warrants in Hounslow on 10 December 2020.

The warrants were conducted in the early hours of the morning and were obtained via the courts under Section 23 of the Misuse of Drugs Act.

Hassan was arrested and charged with modern day slavery, false imprisonment, affray, criminal damage and sec 18 wounding with intent as a result of these warrants on 10 December 2019.

Detective Chief Inspector Andy Thrower, of West Area CID, said: “Both of these men targeted and intimidated vulnerable residents of Hounslow through fear or use of violence, moving into their homes to establish a base of operation to distribute drugs across the west of London and further afield. I have no doubt that the streets are a safer place now they are behind bars, and the length of sentencing reflects the serious and violent nature of their crimes.

"These warrants were a joint effort by officers from the West Area Borough Command Unit and Hounslow Council with the aim of disrupting an established drugs line within the three boroughs. It is this joined up approach to tackling crime that will have an impact on those intent on the supply of drugs and use of cuckooing tactics.

"We will continue to do everything in our power to prevent the abuse and exploitation of people in our communities and I urge anyone with information regarding drug dealing, exploitation, or violent crime to come forward to police. We all have a responsibility to make London a safe place for everyone.”

+ If you are concerned about drug-related crime in your area or think someone may be a victim of drug exploitation, please call us on 101. Always call 999 in an emergency.

If you would like to provide information anonymously, call the independent charity Crimestoppers on 0800 555 111. Young people can give information 100% anonymously by contacting the charity Fearless.

No personal details are taken, information cannot be traced or recorded and you will not go to court or have to speak to police when contacting Crimestoppers or Fearless.

For more information on county lines and how to prevent yourself or a loved one from becoming a victim, visit our website. 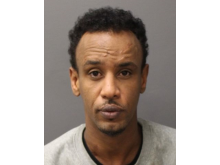