Detectives investigating the murder of 17-year-old Levi Ernest-Morrison in Sydenham have charged a further two people.

They appeared in custody at Bromley Youth Court and were remanded in custody to appear at the Old Bailey on Thursday, 24 April.

Two people have previously been charged with murder.

[A] Nichola Leighton, 36 (05.01.85) of Lockwood Close, Sydenham and a 17-year-old male [B] have both been remanded in custody after appearing at the Old Bailey; next court date awaits.

Levi died after being stabbed in Sydenham Road, SE26 on Saturday, 10 April. 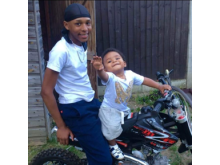