Detectives continue to appeal for witnesses to a fatal stabbing in Barnet on Bank Holiday Monday.

An 18-year-old man died in Montrose Park, Edgware on Monday, 31 May after being stabbed.

Detective Chief Inspector Claire Hine, who is leading the investigation, said: "I'm really thankful for the witnesses who have already come forward and helped with our investigation. I'm now appealing for more people to come forward who saw the incident happen and the moment the victim was attacked. Any piece of information, videos, images could assist us in understanding as to what led to this violent incident where a young man has lost his life.

"The park was busy at the time with a lot of people enjoying the sunny day. If you have any information, please contact us immediately."

Officers were called at 17:54hrs on Monday, 31 May to Montrose Park following reports of a group of males fighting.

Officers responded and found an 18-year-old man suffering from a stab injury in a tennis court area.

He was treated by London's Air Ambulance and London Ambulance Service at the scene. Despite their best efforts, he was pronounced dead at 19:19hrs.

A post-mortem examination is expected to be held on Thursday, 3 June.

Police believe they know the identity of the deceased but efforts to inform his next of kin continue.

A total of 10 males - all aged in their teens - have been arrested in connection with the incident on suspicion of offences including affray and murder. Eight of them have been released on bail with two remaining in custody whilst the investigation is ongoing.

A crime scene remains in place in the park.

Any witnesses or those with information, video or images that could assist police are asked to call 101 reference CAD 5436/31May.

Hard calls save lives. Are you close to someone on the fringes of knife crime? Do the right thing, please give information, 100 per cent anonymously, through the independent charity Crimestoppers. No piece of information about knife crime is insignificant or too small. Any information you give to Crimestoppers can make a difference in reducing knife crime and the harm it causes to families. 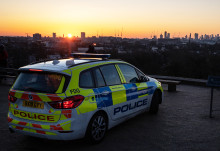 A total of 10 males have been arrested in connection with the incident.