Stolen haulage containers, stolen vehicles, and £50k in cash was recovered by detectives during a day-long search of a yard in Purfleet.

Detectives discovered that one of the containers had been stolen at 03:30hrs that morning and had been at the yard for a matter of hours prior to the police activity. That container, including its contents, was returned to its rightful owner that same day.

In addition to approximately £15,000 being seized during the various warrants at the haulage yard and two residential address in Havering, a search by police dogs uncovered £50,000 in cash inside a vehicle at the yard which has been seized as proceeds of crime.

Three stolen off road vehicles, were found inside one of the containers.

The multi-agency operation, on Wednesday, 18 May, was led by the Met’s East Area Drug Focus Desk and was supported by policing colleagues from British Transport Police and Essex Police.

The premises in Purfleet was believed to be used by an organised crime network.

A 48-year-old man [A] was arrested at the Purfleet yard on suspicion of being in possession of a Section 5 firearm. He was taken to an east London police station and has since been released under investigation.

A 46-year-old man [B] and a 42-year-old woman [C] were arrested at a residential address in Havering on suspicion of possession of a Section 5 firearm and possession of a Class B drug; a quantity of cash was seized, suspected to be proceeds of crime. Both are released on bail to return on a date in late June.

A 32-year-old man [D] was arrested at a residential address in Havering on suspicion of possession with intent to supply Class A drugs. He was taken to an east London police station and has since been released under investigation.

Detective Sergeant Owen Morgan, of the East Area Command Drugs Focus Desk, said: “While I am pleased with the outcome of the operation, the evidence, intelligence and property seized is a mere snapshot of criminality relating to one location on one day.

“Myself and my team are committed to identifying, disrupting and apprehending criminal networks and we will continue do so as long as their trade and exploitation continue to blight out communities.”

Do you have information about somewhere or someone that you think is being used to deal drugs?

If you have information that could help keep your community safe, but don’t want to speak to police, please contact the independent charity Crimestoppers on 0800 555 111. They do not ask your name and cannot trace your call or I.P address. 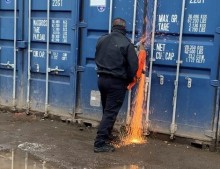 Officers from the Met, British Transport Police and Essex Police have carried out a raid at a container yard in Purfleet as part of an operation targeting organised crime.