A nightclub in Peckham has been stripped of its license following multiple breaches of Coronavirus Heath Protection Regulations 2020 and licensing conditions.

During these visits, officers found the venue was acting a nightclub, contrary to coronavirus regulations, and failing to abide by social-distancing requirements and, on occasion, breaching curfew rules.

A number of breaches of the venue’s licensing conditions were also found to be taking place.

Despite numerous attempts by officers to engage with staff at the premises and encourage them to abide by the new regulations, there were further deliberate breaches.

On the last visit, on Saturday, 26 September, officers were initially blocked from entering the premises and were told no one was inside. When they gained entry they found more than 45 people concealed in the nightclub’s basement area.

The repeated flouting of the rules, and public nuisance which can include jeopardising public health, resulted in Southwark Police Licensing submitting a summary review of the venue to the Southwark Council Licensing Sub-Committee.

Following a hearing on Tuesday, 27 October, Afrikiko Restaurant and Club had its alcohol licence revoked. It has 21 days to appeal the decision.

Sergeant Keith Dempster, from the South Central Command Unit, said: “The Met is determined to protect Londoners by cracking down on the most deliberate and egregious breaches of the regulations that are putting everyone at risk. As the spread of the virus continues, this type of intervention will become even more important, and the vast majority of Londoners who are abiding by the rules rightly expect us to be doing it.

“We don’t want to take away people’s livelihoods – we would far rather they engaged with us and operated in a safe way for everyone.

“However, by repeatedly operating as a nightclub, staff and patrons were exposed to a real risk of contracting and spreading Coronavirus, which would have affected London’s communities.

“Breaching these measures could also play a part in increasing the chance of further lockdown measures being imposed in London that would hurt other businesses.

“Whilst we will always look to engage with licensed premises and explain the new regulations, robust action will be taken against those that simply refuse to abide by the law and who, at the end of the day, put lives at risk.” 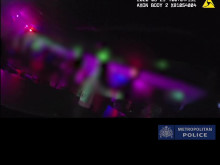