Detectives investigating a fatal stabbing in Walthamstow have named the victim.

Police were called at approximately 17:20hrs on Wednesday, 17 March to reports of a stabbing on Lea Bridge Road, near the junction with Grove Road, E17.

Officers attended along with London Ambulance Service [LAS]. An 18-year-old man was pronounced dead at the scene. His next of kin have been informed and they are being supported by specialist officers.

He has been formally identified as Hussain Chaudhry.

A post-mortem examination held on Thursday, 18 March gave cause of death as hypovolemic shock and a stab wound to the neck.

Two other people – a man in his 20s and a woman in her 40s - were found with slash injuries to their hands. They were taken to an east London hospital for treatment. The woman remains in hospital but the man has since been discharged. They are both related to the deceased.

Detective Chief Inspector Perry Benton, from the Met's Specialist Crime Command, said: "A young man has lost his life in tragic circumstances and my thoughts are with his family and friends at this awful time.

"The attack happened on a busy road during rush-hour and I know there would have been lots of vehicles passing at the time of the incident.

"I would ask anybody who was driving in the area to check their dash cams and local residents to review the footage on their doorbell cameras as these could hold vital information about what happened."

Additional officers will be in the area over the coming days to help reassure the community and listen to concerns from residents.

Detective Superintendent Paul Whiteman, from the team responsible for local policing in Waltham Forest, said: "We remain committed to tackling violent crime and we are working with a number of partners to help us prevent another tragic loss of life.

"You will see extra officers in the area this week and they will be using a range of tactics to target those who choose to put other's in danger by carrying a knife.

"We rely on the support of the local community and I would ask anybody with concerns to contact us on 101 or to report information anonymously to Crimestoppers."

Information can also be provided, anonymously, by calling the independent charity Crimestoppers on 0800 555 111. 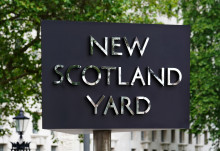 Detectives are appealing for the public's help as they investigate the fatal stabbing of an 18-year-old on Wednesday evening.