A man has has been sentenced after he pleaded guilty to breaking Covid rules after he threw a boat party during the pandemic.

Jordy Nicholas Van Duijvenbode, 31 (19.07.89), of no fixed address, pleaded guilty at Stratford Magistrates’ Court on Friday 30 April, after approximately 30 people gathered for a party on a house boat in Hackney.

Police received several calls in the early hours of Saturday, 13 February to reports of a large number of people playing music on a boat on the River Lea between Tottenham Lock and Hackney. Officers responded and located the boat off Hackney Marshes at approximately 04:20hrs.

Acting Chief Inspector Pete Shaw, responsible for the Met's response to Covid policing in central east London, said: “This draws a close to what has been an ongoing investigation where Van Duijvenbode was involved in several breaches of the COVID legislation, potentially putting attendees, the wider public and my officers at risk. I hope this sends a message that where there are breaches of the legislation, especially wilful breaches like house parties and UME’s the police and CPS will look to prosecute the organisers and attendees and this case demonstrates you will receive substantial fines.

"I would like to thank all my colleagues, the CPS and the Canal and River Trust who spent time and effort in making sure that this case had the right result bringing Mr Van Duijvenbode to justice.” 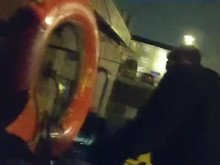