A woman has been sentenced to an indefinite hospital order following the death of Stefan Melnyk in Acton last March.

Rhian Beresford, 29 (17.07.91), of Hope Gardens, Acton, W3, pleaded guilty to manslaughter by reason of diminished responsibility on Monday, 21 December when she appeared by video link from a secure mental health facility.

She was sentenced at the Old Bailey on Friday, 19 February.

Stefan died as a result of injuries sustained in a serious road traffic collision in Acton on 22 March 2020.

Beresford also pleaded guilty to causing grievous bodily harm to a second man who was attacked with a knife during the same incident.

Pleas of not guilty to the murder of Stefan Melnyk and the attempted murder of the second victim were accepted by the Crown Prosecution Service.

Police were called to Salisbury Street, Acton, W4 at around 12:50hrs on Sunday, 22 March 2020, following reports that a car had struck a man in the street.

When officers arrived, they found 54-year old Stefan Melnyk being cared for by members of the public. He had sustained serious injuries and was taken to a west London hospital where he died the next day.

Another man, aged 39, was attacked with a knife and received injuries to his hand following the collision.

She was remanded in custody following a first appearance at Ealing Magistrates’ Court on Tuesday, 24 March.

DetectIve Inspector Garth Hall, of the Met’s Specialist Crime Command (Homicide), said: “As the pleas entered at court indicate, this is a case where it is accepted that severe mental ill health was a key factor.

“While this may go some way to accounting for the events of that day, it nonetheless remains a tragic incident and my thoughts are with Stefan Melnyk’s family as they continue to come to terms with their loss.

“I would also like to once again thank and pay tribute to the members of the public who came to Stefan’s aid in the most traumatic circumstances.” 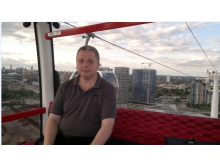