A 12-month joint operation to disrupt violence in the south east of London has led to 145 arrests and 56 weapons seized.

Officers from the Met's South East Basic Command Unit Neighbourhood Team were based at various locations around south east London and Kent on days of action in a bid to bear down on violence in the area.

The effort included covert assets, knife arches and drug dogs. The proactive work also utilised tactics such as stop and search and officers specially trained in spotting those with criminal intent. Officers were also supported by Met Special Constables who were a valuable asset to the operation.

So far the operation has seized 56 weapons including three firearms, 36 knives and 17 other weapons including police-style batons and knuckledusters. In one instance, officers stopped one man travelling with a military-style commando knife - the knife was immediately seized and the man was arrested. He was sentenced to 12-weeks in prison.

The arrests varied from individuals wanted for robbery, burglary, sexual assault and possession of firearms.

Chief Inspector Mick Chattenton, of the Met South East Command Unit, said: “This work has been so successful that we now plan to run the operation proactively for the foreseeable future.

“During August alone we made 20 arrests, these were for offences such as possession of an offensive weapon and for drug supply.

“We will continue to be out in force at transport hubs around south east London over the coming months.

“Working together with BTP and Kent police has been instrumental in bearing down on violence. Sharing information and strengthening our numbers with this support led to a reassuring police presence and clearly notable results.

“It was the passion of PC James Robinson, Sergeant Matthew Hunter from our Command Unit and Sergeant Ben Jones of the British Transport Police to make the communities of London safer, that led to this sterling effort and, one-year-on from launching, we are going from strength to strength.”

Superintendent Chris Horton, of the British Transport Police, said: “This has clearly been a highly successful operation alongside our colleagues from the Met and Kent police, and it is a great example of what we have to gain from working together.

“Preventing serious violence and knife crime on the rail network remains one of the highest priorities for BTP, and we are committed to ensuring everyone has a safe journey.

“By using knife arches and stop and search powers in a controlled way, we’ve been able to seize over 50 weapons before they’re used to potentially take a life. Fortunately, assaults involving a weapon on the railway are extremely rare, and operations like this are part of our commitment to keeping our network safe.”

The police will continue to work tirelessly to identify and pursue offenders, help bring perpetrators to justice, take weapons off the street, support victims, engage and reassure the public, and keep our communities safe.

The public also play a huge role in helping to both prevent and detect crime. We need their help to identify those willing to commit terrible acts and carry weapons. We need to hear from anyone who has information about a crime, or about someone they suspect to be carrying a weapon or involved in organised crime.

Advice and support is also available through organisations including Knife Free: https://www.knifefree.co.uk/get-help-support/ and www.met.police.uk/stopknifecrime 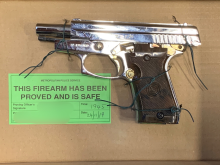 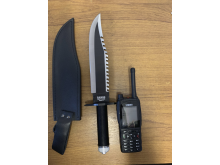